Figure : XCAMS facility for 14C, 10Be and 26Al AMS measurements 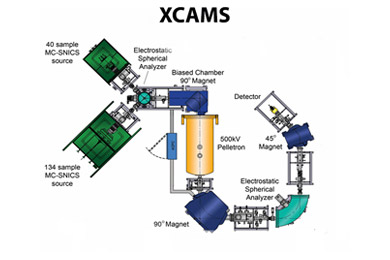 Figure : XCAMS facility for 14C, 10Be and 26Al AMS measurements

AMS is a highly sensitive method of counting atoms and used to detect very low concentrations of long-lived radionuclides with isotopic abundances between 10-12 to 10-16. High discriminatory power of AMS against isobaric and isotopic interferences is provided by the high ion energy from the accelerator, which enables single atom counting using nuclear counting techniques. The radiocarbon lab code for reporting 14 C dates produced from this system is IUACD. This AMS system was commissioned in 2015 and has produced high quality valuable dates using 14C, 10Be, and 26Al radioisotopes. These high precision numerical dates have helped geoscientist in diverse research domains including Quaternary lake and fluvial sediments studies, tectonic and paleo-climatic studies, erosion/denudation & exhumation history of the young Himalayan mountain belt, Paleo-seismological studies and historic and prehistoric archaeological sites, etc.

A large forward geometry High Resolution Secondary Ion Mass Spectrometer (HR-SIMS), model: CAMECA IMS 1300-HR3 (high Reproducibility, high spatial Resolution, high mass Resolution), is installed at IUAC. IMS 1300-HR has two ion sources: Cs microbeam source and Hyperion RF source (for oxygen) for the analysis of positive and negative secondary ions. For compensating positive charging effect, it is equipped with electron gun. Automated sample loading system is one of its key features. At a time 6 samples can be stored in the storage chamber and vacuum of the order of 10-8 mbar can be maintained within storage chamber so that stored samples can be outgassed overnight before starting the analysis. 1300-HR3 has versatile multicollection system that has five trolleys which can be used for simultaneous isotopic ratio measurement. It covers a broad mass range of elemental and isotopic species, from low mass (H) to high mass (U and above). Large geometry of the instrument keeps the good transmission so the sensitivity even at high mass resolution. All these features make this instrument widely applicable for 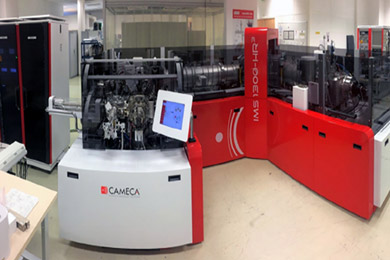 HR-ICPMS (Model: ELEMENT-XR, Thermo Fisher Scientific) is a Magnetic sector field Double focusing mass spectrometer. Argon plasma is ignited in the ICP torch by coupling the RF energy with argon gas. The sample aerosol is introduced to the plasma and the positive ions of the components of the aerosol are formed. The positive ions are passed through a high-resolution magnetic sector. This magnet selects the ions based on the ME/q2 (m- Mass, q – Charge state, E-energy) of the incident ions. The detection system is equipped with one secondary electron multiplier (EM) for low ion beam current and one Faraday cup for high beam current suitable for a wide range of isotopic analysis for various geochronologic applications. An auto-sampler and syringe driven inline dilution system (Model: prepFAST, Elemental Scientific) is interfaced with the sample introduction system. HR-ICPMS in its liquid sampling mode is capable of measuring ultratrace elemental abundances and isotopic ratios of geological importance, e.g. Rb-Sr, Sm-ND and Hf-Lu systematics.

Element XR at IUAC has also been interfaced with a Ti-doped sapphire crystal user-friendly femtosecond laser ablation system (Excite Pharos, Teledyne CETAC Technologies, USA) for in situ analysis of geological samples. The system is configured at 206 nm wavelengths for delivering an energy density of 3 J/cm2 (at 206nm) on sample surface suitable for zircon dating. It is equipped with the class leading HelEx II Active 2-Volume Ablation Cell for efficient ablated aerosol transport to ICPMS. It is being used extensively for U-Pb geochronological application of accessory minerals, primarily zircon, in combination with HR-ICPMS. The current set-up is also being standardized for in situ analysis of Hf isotopes in zircon alongside U-Pb dating and Sr-isotopic measurements in carbonates including speleothems. The high resolution of ELEMENT XR makes it suitable for the measurement of several other isotopic ratio measurements also. 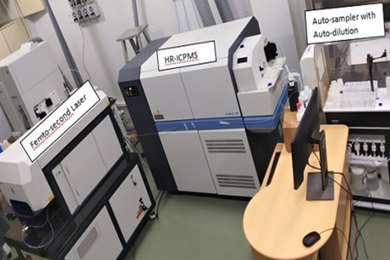 Q-ICPMS is a low resolution more versatile fastest growing multi-element trace/ultra-trace element analysis mass spectrometer suitable for analysing a wide range of samples and matrices in liquid form. A compact user-friendly high-performance Q-ICPMS (Model: iCAPQ, ThermoFisher Scientific) has been operational since early 2018 and regularly producing bulk trace element data. The samples are introduced by the peristaltic pump to the nebulizer where the fine aerosols of the sample are generated. Argon plasma is ignited in the ICP torch by coupling the RF energy with argon gas. The sample aerosol is introduced to the plasma and the positive ions of the components of the aerosol are formed. These positive ions are passed to the quadrupole which acts as a mass filter and selects a particular m/q at one time (m- Mass and q – Charge state). Ions of a given m/q are counted by the faraday cup detector which gives the measurable electronic signal corresponding to the number of incident ions. An auto-sampler attachment (ASX560, Teledyne CETAC Technologies) enables Q-ICPMS unattended automatic sample analysis of 180 samples per batch. Q-ICPMS at IUAC has been used for the trace element and rare earth element (REE) analysis of the water samples and digested rock and sediment samples. Q-ICPMS provides a dynamic working range from ppb to percent.

This Q-ICPMS can also be interfaced with Fs-LA system for extending its application to in situ solid sample micro-analyses with detection limits down to ug/mg (ppb) level and is also capable of doing U-Pb zircon dating with reasonable precision and accuracy with high throughput. 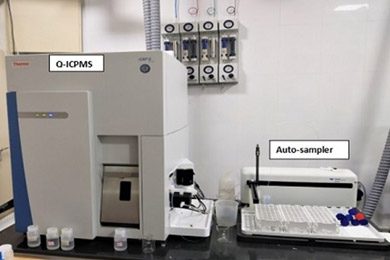 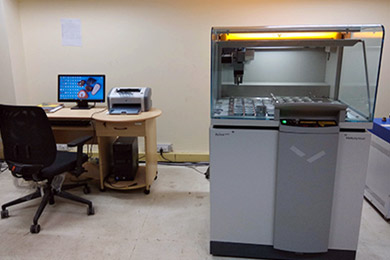 A sequential wavelength dispersive X-rays fluorescence spectrometer (Model: Axios Max, PANalytical) has been operational since 2018. This spectrometry is being utilized for non-destructive elemental analysis of rocks, mineral, sediments for geological applications. XRF calibration curves have been made using the available standards. A fuse bead machine, pressed pellet machine and vibratory cup mill have been installed for the sample preparation required for XRF measurements. 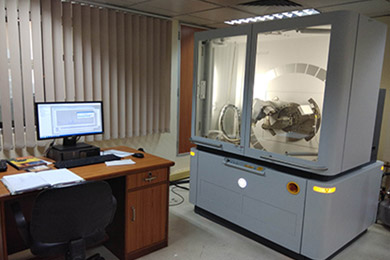 Accelerator Mass Spectrometry at IUAC started in 2004-05 by upgrading its existing 15UD Pelletron to make it suitable for 10Be and 26Al measurements. This was the first AMS facility in India for the detection of 10e and 26Al . This facility has been explored by various Indian earth scientists. The facility has following features:

Multi-Cathode Source of Negative Ion by Cs Sputtering (MC-SNICS) is capable of holding 40 cathodes. Cathode holder can be rotated in both ways from control room. Bidirectional motion and quick change of cathodes is necessary in AMS measurement for changing standard and AMS sample quickly to neglect accelerator parameter variation effect between different measurements 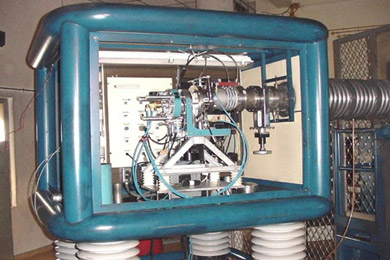 IUAC Pelletron facility is equipped with foil stripper and gas stripper assembly. For AMS studies, transmission through the accelerator should be optimum. Gas stripper produces less divergence after stripping compared to foil stripper. Transmission also reduces by scattering of beam by gas molecules in accelerating tubes. So good vacuum should be maintained in these tubes. Therefore a new re-circulating turbo molecular pump - based pumping system has been designed and installed in the high - voltage terminal of the accelerator. This helps in improving beam transmission by maintaining good vacuum in the accelerating tubes while holding required gas pressures in the stripping area. 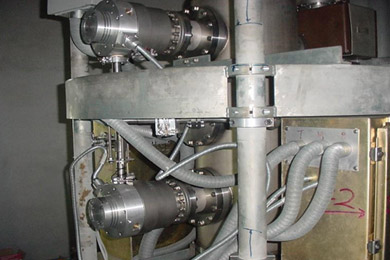 Off-Set Faraday is installed after the analyser magnet. It is used to count stable isotopes which follows different trajectory after passing through analyser magnet in the case of simultaneous injection of both isotopes. For example In the case of Be-10 measurement both 10Be17O- and 9Be17O- are injected simultaneously by selecting mass 26 in the injector magnet and that after acceleration17O5+ which is representative of 9Be current, is collected in the off-Set Faraday cup. Off-Set Faraday cup is fitted with linear motion feed through and port aligner to make sure that all the stable ion beam should be collected in the Cup. Stripping can also happen at the places other than terminal by residual gas molecules inside the accelerating tube. These ions may not have the assumed value of kinetic energy T and accidentally can match the MT/q2 and cannot be rejected by the analyser magnet. Stable isotope can also come by scattering off chamber walls of the magnet or residual gas molecules, because they are much more abundant. All these unwanted entities can be separated by the Wien filter (T/M selection). In Wien filter electric field E and magnetic field B are oriented at right angle to each other and perpendicular to the direction of motion of the ions. Wien filter transmits only those ions having a particular velocity, which is tuned with electric and magnetic field inside the Wien filter given by v = E / B. All other unwanted ions are deflected from the central path which are later intercepted by the slit installed before the detector. Gas cell Absorber is installed after the AMS Chamber and before the MAGIC detector. It is used for stopping 10B, the isobar of 10Be before detector. Gas cell absorber and AMS chamber is separated by 6 micro meter myler. For absorbing 40MeV 10B, 220 milli bar pressure of N2gas is required in gas cell absorber.

Multi - Anode Gas Ionization Detector is used to count rare isotopes after identification as having correct Z (atomic no.) and M (mass). IUAC MAGIC Detector system consists of 5 sections of anode(2cm, 5cm, 5cm, 5cm, 10.6 cm having 1 mm gap from each other), one cathode and frisch grid. The frisch grid is kept at ground potential. It is used to ensure that the size of the induced pulse on the anodes is independent of lateral position of ionization event inside the detector.All the feed through connections are taken on the back flange of the detector through LEMO sockets. On the front flange of detector, myler window of 6 micro meter thickness is present for holding the gas inside the detector and to slow down some impurities. Iso-butane gas is used as counter medium. Gas input and output connections are taken through two KF-16 ports. Two similar ports are also present for By-Pass valve and Vacuum dial gauge. One rotary pump is used at the outlet port to take out the gas from the detector for maintain the pressure.