Ion implanter accelerator facility at Inter University Accelerator Centre provides varieties of highly stable, collimated negative and singly charged ion beams with variable low energies, 30 to 200KeV and current intensities, few nA to few μA. This makes the facility an excellent tool to do research in material science through ion-solid interaction in nuclear energy loss regime such as material synthesis, device fabrication and material modifications. The features of the facility are as follows.

The accelerator equipment essentially consists of an ion source, an accelerating column, mass analyzer and a target chamber, where the ions impinge on a target. The design and development of the facility has been done indigenously with several beam line components developed in-house at IUAC such as high voltage platforms, electrostatic Quadrupole triplets lens, electrostatic Quadrupole steerers and high vacuum experimental chambers. 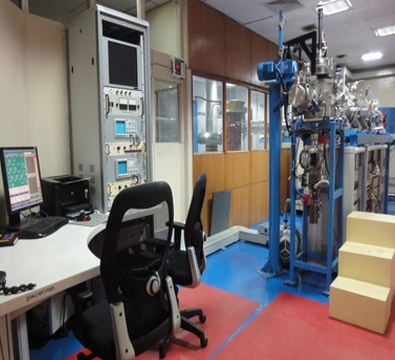 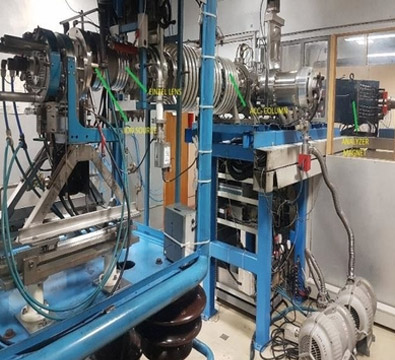 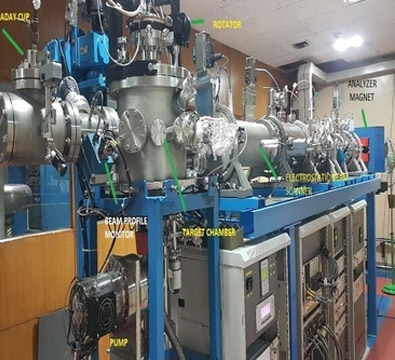 The ion source in use for generating negative ions is MC-SNICS. The source and its electronic devices are placed on a high voltage platform (200kV) and those are controlled through optical fiber communications. Ion source uses accelerated cesium ions striking a cold cathode to produce a negative ion beam of cathode material, provided the material could form negative ions. A conical-shaped tantalum ionizer immersed in cesium vapor produces cesium positive ions. These positive ions are accelerated towards the negatively biased cathode, which then accelerates negative ions always from the cathode. Not all elements form stable negative ions. Molecular ions are used in those cases by choosing the lightest possible molecule, such as hydrides.

Ion beams extracted from the source are accelerated through three accelerating tubes and mass analyzed by a dipole magnet and injected into the beamline at ninety degrees. The figures show; 1) Implanter facility, 2) ion source at the high voltage platform and the accelerating column for the acceleration of ions and 3) the dipole magnet which switches the ion beams to the beamline. A target chamber at the end of the beamline has the provision of both linear and rotational movement of the target wafer. Linear movement is controlled by using motorized linear motion feedthrough while rotational movement is done manually.

Ion beams accelerated through the implanter accelerator system and had been utilized for experiments are given below with their current intensities.

The facility is in use mainly for material science researches such as material synthesis, device fabrication and material modifications.